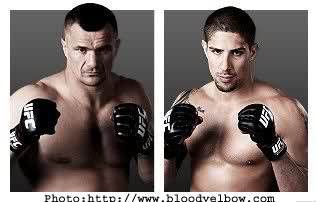 A heavyweight match up is now officially heading to New Jersey on March 19 , as former PRIDE star Mirko "Cro Cop" will be squaring off against the heavy-handed up-and-comer, Brendan Schaub. "Cro Cop" recently spoke about 2011 being "his best year" as he is feeling healthy after undergoing a series of rehab therapies and has greatly improved his cardio level after training with Ivan Hippolyte.

Brendan Schaub is at a very interesting point in his career. Schaub’s record stands at 7-1, with six first-round (T)KO wins. Three of those wins occurred under the one-minute mark, the other three barely passed it. And yet Schaub’s defining UFC moment still seems to be his TKO loss to Roy Nelson. However, as he nears a pivotal fight with Mirko Filipovic, Schaub is ready to put the past behind him and seems to have figured out the best way to combat the PRIDE FC legend and feared Croatian striker: respect him enough to try and viciously separate him from consciousness.

On March 13th 2011. on the "Horarna Astrologija - pitaj konkretno forum" I saw a post from a member, "Baphomet" , a huge fan of Croatian Mirko, with a question: "Will Mirko "Cro Cop" be the winner of the match on March 19?"

Here is the horary chart cast for date, place and time of when "Baphomet" asked the question :

Let's see what the chart says!

After looking at the chart I left the following post on the "Horarna Astrologija - pitaj konkretno forum" a few days before the match:

In this type of chart, Mirko is given the first house on the basis of the supporter's identification with him; so Mirko's main significator is Ve, not so appropriate for the ultimate fighting player. I expected to see, for example, Ma as ruler, but here, Ma, being the 7th house ruler, represents his opponent, Brendan Schaub. We cannot ignore and must observe that Sa rx in the 1st house. Saturn retrograde in the 1st house is taken by Lilly, Bonatti, and others as destructive of the question or the querent somehow - in modern English that means that whatever the result, it will come to a bad end for the querent in one way or another. This is a bad testimony for Mirko.

Next, we look for dignities. Accidental dignities are more or less the same, so essential dignities are more important and they are in favour of Ma, Mirko's opponent. Another bad testimony for Mirko. You might say: Ma is combust, Ma is weak! Yes, Ma is combust. You must observe a planet is more afflicted when the Sun hastens to conjunct the planet. But when the Sun receeds from the planet, as in this case, and is near the end of the orb for combustion, which is 8,5 degrees, you can ignore the combustion.

Now, we look for the Moon's aspects, because the Moon shows the flow of events. If Mirko is going to win, then we must have an aspect between his ruler, Ve, and the ruler of the 10th house, the house of success, which in this case, is the Moon. We see that the Moon goes to trine Ve. But, first, we have a sextile with Ju. So, Ju prohibits the Moon's aspect to Ve, that is, it prohibits Mirko from winning. Ju is ruler of Mirko's 6 house. That means health problems might prohibit Mirko from winning. So, my prediction was that Mirko would not win !

After the match on the http://www.usatoday.com website I read the following text: