WILL SPAIN BEAT PORTUGAL AND GO TO FINAL?

On 27. June 2012 on EURO 2012 there was a semi-final game between Spain and Portugal. After the regular end of the game which finished 0-0 and before extra time began, I asked the question:

Will Spain beat Portugal and go to final?"

Here is the horary chart cast for the date, time and place of when I asked the question:

Because I am a huge Spanish fan, we give Spain the first house and its ruler Saturn. Their opponent, Portugal, is represented by the 7th house ruler, Sun. In this type of question, the most important considerations are accidental dignities and in this chart they slightly favored Spain:

This is a huge difference in favor of Spain and together with accidental dignities it shows that Spain will win. Furthermore we see that on top of the 10th house (house of success) is the North Node-gain and that Moon as a general significator of future events will conjunct Saturn (Spain). Saturn also conjunct fortunate fixed star Spica.

So, after I analyzed this chart, I was so relieved, that I was able to watch extra time and penalties without any nervousness (all that nervousness and my worry are shown in the chart because Moon as a 'soul' of the horary question and planet that always shows where our mind really is, is in the 8th house-house of 'anguish of mind' as Lilly put it.) 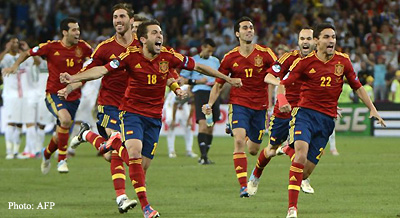 After the penalties Spain won this game 4-2.