Before the start of Formula 1, being a Kimi's fan, I asked the question: Will Kimi Raikkonen be the winner of 2006 Formula 1?

Here is the chart cast for date, place and time of when I asked the question : 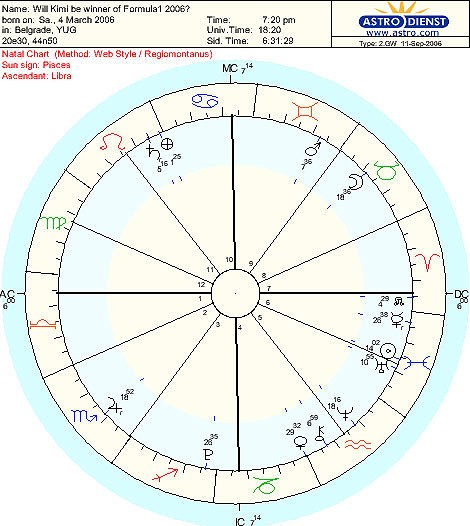 Because that first place in Formula 1 wants about 20 drivers, and because I am Kimi's supporter, we have to choose 1st house for Kimi and 7th house for "rest of them". Lets see which ruler is stronger.

Hm...at the very start it is not promising for Kimi. South Node is in tight conjunct with ASC. That is not good sign. Ruler of 1st house, Ve, is at the last degree of Cap (29Can32), SLOW, angular but very distant from 4th house cusp, disposed by Sa rx. I do not like this. The 29th degree shows that a person is "about to make a definite change." It can also show desperation, impatience, misfortune .

Ruler of 7th house is Mars, FAST, succedent, in different sign of house cusp, so its strenght is diminished, disposed by Me rx under Sun's beam.

If we except speed of planets it seams that Kimi's ruler is better positioned. But because of that South Node, slow speed of Ve and ruler on last degree, I give advantage to "them". It seams that Kimi will have no lucky this year .

Over half the grid had yet to run a timed lap when, with just over 4 minutes remaining, Kimi Raikkonen's McLaren appeared to suffer from a suspension failure.

Montoya finished fourth after a quiet run, but McLaren lost Kimi Raikkonen on the first lap after a brush in Turn 5 from the Red Bull of Christian Klien sent him spinning into the wall and retirement.

One more misadventure for Kimi...

With 30 laps to go Mark Webber, racing in third position, blew up his engine. The safety-car was sent out and thus Alonso and Raikkonen both dived into the pitlane. As the safety-car was out Kimi Raikkonen's Mercedes engine got overheated and goes up in smoke. Raikkonen had to pull out of the race as the third driver within a minute.

Montoya slid into the back of Raikkonen pushing the Finn into Nick Heidfeld which cause the BMW to roll three times before coming to a standstill. Montoya meanwhile slid into Button who then went into Speed, taking the American out of the race. Further back down the order Klien, Webber and Montagny all came to blows and the start took eight cars out of the race.

A first lap collision put paid to the hopes of McLaren's Kimi Raikkonen, winner from pole position of last year's inaugural race at the Istanbul Park circuit. The Finn was caught up in a six-car shunt at turn one after Fisichella spun and was left facing the oncoming cars. Raikkonen, hit by Toro Rosso's Scott Speed, crawled back to the pits with a shredded left rear tyre. But there was clearly a problem with the car when he returned to the track and he ploughed into the tyre wall.

Ferrari announces that it has reached an agreement with the driver Kimi Raikkonen to cover the 2007, 2008 and 2009 racing seasons. Massa and Raikkonen will form the Scuderia's official line-up as of 2007. The McLaren team thanked Kimi Raikkonen for the time he spent with the team and said: "I have enjoyed working with Kimi over the past five seasons and as a team we have achieved a lot of success. He is a very special driver and obviously everybody at McLaren wishes him all the best in his future career."

As we see, Kimi made a definite change this year. (his ruler on last degree...)

Lap 19: Kimi Raikkonen is slowing down and looks to have problems with his car. The Finn's speed limiter appears to be stuck. The McLaren driver retires from the race.

DRIVERS' STANDINGS AFTER THE LAST RACE:

As chart said, Kimi did not make it.