This site does not serve to predict winner of a football match, for instance; what this site can do is to teach you how to doing it - all by yourself!

First of all, you must become familiar with the art of horary astrology.

Horary astrology can be used to predict the winner of a sports event in two ways:

For the event chart, we always cast a chart for date, time and place of the match.

There are several methods to do a horary reading of an event chart where we need to consider the home team and the visiting team. 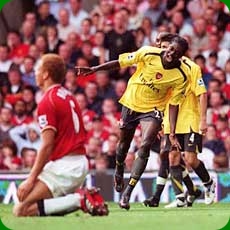 Look well at this picture, and then look at the chart! How appropriate is chart regarding the kit's colour of teams in this case!

If you cast the chart you got ASC=3Cap05.

Ruler of ASC is Sa in Leo. As you see on picture, Arsenal has yellow (Leo) and black (Sa) sports kit. So Arsenal is ASC and its ruler!

Ruler of DSC is Moon (white) in Leo (bright red). So, DSC and its ruler is Manchester United.

If you are not sure which team to choose for the ASC just look for a colour which is suitable for the ASC sign and its ruler:

There are some final matches which are being held on neutral stadiums and in than case it is not easy to decide which team is the ASC and which one is the DSC. In such a situation you have to consider the adequate zodiacal sign which represents the country or the city in the question. For that purpose go to this link:

When you determine who is ASC and who is DSC, first check out the potential for a draw. The match is drawn usually if:

Here is the example chart for the match which ended as a draw - 1:1. This is the event chart for match Barcelona vs. Chelsea.

As you see, the dispositor of the Moon is combust and retrograde. I noticed, in my practice, then whenever you have retrograde planet in house of fame and success (10th house for the ASC team, or 4th house for the DSC team, here we have Sa rx in 10th house), there are more possibility that goals will be scored in the second half of the match. That was the case in this match. Ronaldinho (Barcelona) scores in 78min, and then in 90+2min. Lampard (Chelsea) scores from the penalty spot. I also noticed, from my practice than whenever you have Chiron in the 10th or 4th there are more possibility of penalty.

When in horary event chart angles are cardinal, rulers cardinal and Moon cardinal all happens very quickly so everything will be completed until 90 min.

When in horary event chart angles are mutable, rulers mutable and Moon mutable all happens less quick so we can expect extra time.

When in horary event chart angles are fixed signs, rulers and Moon also all happens slowly so we can expect penalties.

Of course, you will rarely get so clear "picture", but you then count and see what fact prevails (cardinal, mutable, fix).

See my example chart for extra time and penalties:

If there is no potential for a draw, then go on and look for rulers of corresponding houses, their accidental dignities and determine which is stronger. Please note that this step takes careful consideration and it is never as easy as it sounds like! But if accidental dignities and debilities are more or less equal, a strong discrepancy of essential dignity can be crucial.

For Lilly's table to examine the accidental dignity & debility of each planet click here!

For Lilly's table to examine the essential dignity & debility of each planet click here! 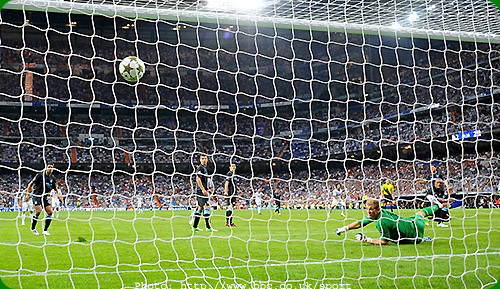 Thanks to Peter from Canada, one member of Sports astrology forum I get to know how to predict timing of goals! Here are his suggestions:

If you want to predict the time when goals will be scored you have to add a minute by minute on kick/off time and see if there are some change regarding signs on cusps or regarding planet entering in the new house. But the problem is that not every change means goal, but every change is possible for goal.

For goals in the second half it is important to know add time and pause time exactly. For example, goals scored in 61min may mean 45 min 1st half + for example 2 minutes add time + 15 minutes pause +16 minutes from 2nd half. Because there must past 4min for change one degree, in some cases you have goal few minutes after some change.

As you see, after only 2 min from kick/off, ASC/DSC axis change sign to Le/Aq, but at that time no one scored. Next change was at 20:55h (10 min), when Mercury from the 5th house entered in 4th house. Two minutes later Ronaldinho score for Barcelona. At 21:02h (17min) Saturn entered 1st house and that was the time when Gudjohnsen scored the second goal for Barcelona.

From my experience goals are usually scored when:

These are examples that, I hope, will help you in analyzing astrological sports charts!!

Hopefully, you will find my experience useful and soon you will become inspired to inquire more deeply into a most wonderful world of horary astrology!

To contact me, send email: [email protected]. Use the same email if you want to know

when this page has been updated (with subject "subscribe").