Super Bowl LII is here, and it’s almost time to join the millions of Americans in watching the Philadelphia Eagles challenge the reigning champions, the New England Patriots, for football supremacy. Thirteen years after squaring off in Super Bowl XXXIX in Jacksonville, Florida, the New England Patriots and Philadelphia Eagles will take to the field for Super Bowl LII on Sunday, 4. Feb. 2018.

Who will win the Super Bowl 52?

Here is the event horary chart cast for the date, time and place where the match was to be held: 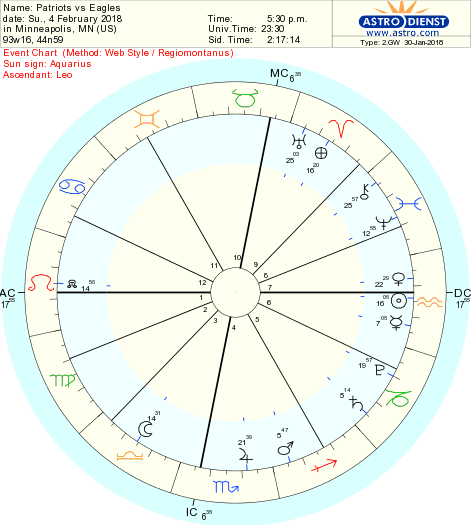 After looking at the chart, I left my prediction, that the Philadelphia Eagles will win the Super Bowl 52, in the "Sports Astrology" section of the Astrologyweekly Forum 4 days before the match!

Because New England Patriots chose to wear white jerseys, they are represented by the ASC ruler Sun.

The Philadelphia Eagles will wear green jerseys, so they are represented by DSC ruler Saturn.

Next, I noticed that the Moon is in the same degree as Nodes, so activity will have some misfortune that could be called a catastrophe in some way (probably bad weather).