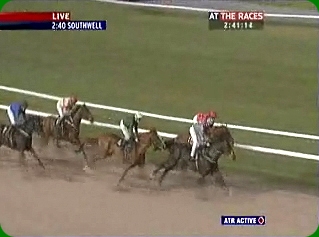 Which horse would win this race? As I said in one of my previous examples, many people place a bet simply by choosing a name that they like or by which jockey's colours appeal to them the most! But by using the John Addey's method we can predict the winner of a particular horse race with greater accuracy! The rules of John Addey's system are:

Here is the event horary chart cast for the date, time and place where the race was to be held:

Information about every horse running at the course (which among other things includes gender) can be found on the Internet. For this race I found the race card at this Internet address: http://www.racingpost.com. Here it is:

Look at the chart! The cusp of the 5th house is at 3Ge1 and the first planet it aspects is Ve at 4Li30! Venus is a female planet, so, first of all, the winner will be mare! In this race there were only two mares!! One was called Blue Nymph and second was called Dart. Ve is in its own sign and in the 7 house. Venus or Aphrodite was the mythological Goddess of Love and Beauty. We know that Venus in Libra usually indicates attractive female people, so by association that fits with Nymph. Blue fits with the planet Ve because of the colours Venus is associated with. So I picked the horse named Blue Nymph as the winner .

So, my prediction was that Blue Nymph would win , although the betting forecast did not agree! I left my prediction on Tyl's forum one day before race.