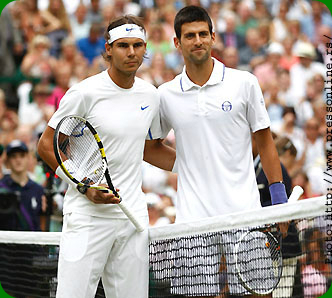 Rafael Nadal (ESP) vs Novak Djokovic (SRB) the best two players in the world, will stand toe to toe on Championship Sunday (3rd July) at Wimbledon 2011 after coming through their respective semi final challenges, relatively unscathed. Serbia’s Novak Djokovic was the first to reach the final, with a solid display against Roger Federer’s conqueror, Jo Wilfried-Tsonga.

With that win, Novak Djokovic has now taken over the mantel of World Number One. It doesn’t matter what happens in the final, all of his hard work, and incredible 2011 form has been rewarded with a proud moment for him. He is the new world number one and that is a big status to take into the final against Nadal. Well, Nadal is leading the head to head stats, with 16 victories to Djokovic’s 11. Nadal has won three titles this year, compared to the Serbian’s tally of seven. The year to date win/loss record for Nadal is 45 wins and 7 loses, while Djokovic of course has had an incredible year of 41 wins and just one defeat in 2011.

Who will be the winner of Wimbledon Championship 2011?

This is the event horary chart cast for the date, time and place where the final match will be held :

Let us take a closer look.

I will use Frawley's method which means that the favourite player is represented by the ASC ruler, because, here, I cannot use the colour method as all players must wear a white sport's kit. So, because the odds show that Nadal is the favourite, he is represented by the ASC ruler, Venus, on the last degree of Gemini. The 29th degree shows some misfortune connected with the matter, and it also may indicate that he is at the end of his patience or desperate.

Novak, therefore is represented by the DSC ruler, Mars.

The accidental dignities show that Mars=15 and Venus=2. This means that Novak has the advantage. In addition, Mars's antiscion is at 21Can11, on the cusp of the MC, so Novak controls Nadal's success. Another advantage for Novak! Next, we look for the Moon's aspect within 5 degrees and find a sextile to Mars/Lord7 and a sextile to Saturn/Lord4 (turned 10th house for Novak). Generally, it is the last Moon's aspect over this range which gives the indication of victory, so this is also a positive testimony for Novak. Judgement is clear: Novak will be the winner !

After looking at the chart I left my prediction that N. Djokovic will win the Wimbledon Chapmpionship 2011 on the Horary section of the Horoscopeschat Forum one day before the final match.

After the match on the http://news.bbc.co.uk/sport website I read the following text: